High diversity of the invertebrates in the reserve is connected with a great variety of flora and vegetation. However, there is still not enough information to describe their structure and composition in details. There are results of the inventory of separate taxonomic units. 243 spider species (Aranei, Arachnida) and 625 butterfly species (Lepidoptera, Insecta) have been registered in the reserve.

The regular monitoring of the ground beetle composition and number is held, as these beetles are a good indicator of the ecosystem conditions. 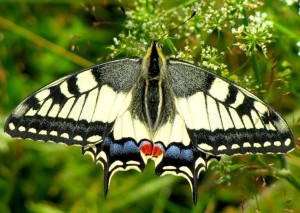 A special attraction is the largest and most beautiful butterfly of the region, the Old World swallowtail (Papilio machaon L.); it belongs to the Swallowtail butterflies and is included in the Red List of the Moscow Region. Wingspread of male is 65-80mm, of female – 75-95mm. The main colour of the wings is deep yellow. The fore wings are with black spots, veins, and wide black border. Underwings have “tails” up to 10mm and are blue with yellow spots; brown-red eye boarded with black is located in wing corner.

The fauna of the vertebrates here is represented by 10 species of amphibians, 5 species of reptiles, 142 species of birds, 57 species of wild mammals.

The fauna of the reserve is represented by 140 bird species. It is mostly abundant in spring and summer:

The modern fauna of wild mammals of the reserve is represented by 57 species typical for the Russian Plain:

The main attraction of the reserve is the European bison. In 1948, in the reserve a bison breeding centre was created. It became the center of bison restitution and breeding in Russia.