On March 19, 2015, the Prioksko-Terrasny State Nature Biosphere Reserve was named after Mikhail Zablotsky, an outstanding scientist, who founded the first Bison Breeding Centre in Russia.

Mikhail Zablotsky was born in a physician’s family in Krasnoyarsk on November 21, 1912. In 1936, he graduated from All-Union Zootechnical Institute with honors and was assigned to work in the Institute of Animal Hybridization and Acclimatization in Askania-Nova near Kherson, where the only bison in the USSR named Bodo was kept. Since then a bison became the main interest of his work and his life.

In 1939 with the help of his colleagues, Mikhail Zablotsky worked out a plan of bison restitution in the USSR. However, the plan was not to be realized due to the war.

From August 1941 till December 1945, Zablotsky participated in military activities from Leningrad to Prague. He was a battery leader of Vyborg Guards Separate Army Mortar Regiment and he was awarded two orders of World War II, two orders of the Red Star, medals “For the Defense of Leningrad”, “For the Capture of Vienna”, “For the Victory over Germany” and others.

After the war, Mikhail Zablotsky was appointed senior researcher of the chief department for reserves of the Council of People’s Commissars of the RSFSR and became engaged into a very complicated issue – the bison restitution. The Prioksko-Terrasny State Nature Reserve was chosen as a place to create the Bison Breeding Centre there, as in its territory there was the remaining of oak forest and areas of mixed forests, appropriate for bison habitat. Besides, there was good transport infrastructure. The Breeding Centre construction began in 1947 according to Mikhail Zablotsky’s project. 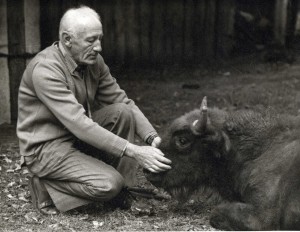 In 1949, Zablotsky became the senior researcher of the reserve and the head of the Bison Breeding Centre. Together with his family, he lived in a house situated 300 meters from the Breeding Centre to have bison under constant supervision and to be able to resolve all the problems arising there. His wife, Lidia Zablotskaya, was his faithful companion in the bison restitution. Their daughter, Maria Zablotskaya, has been working in the Prioksko-Terrasny State Nature Reserve for 30 years, she is a scientific supervisor of the section called “Bison Management and Breeding in the Bison Breeding Centre.”

On the basis of young stock of the Prioksko-Terrasny State Nature Reserve Mikhail Zablotsky set up three subsidiary bison breeding centres: in the Oksky Reserve in the Ryazan Region, in the hunting estate “Nauyamestis’ in Lithuania and on the wisent farm “Cherga” in Altai. In 1961, the bison restitution in the nature started. Zablotsky led numerous expeditions to the forest areas suitable for bison production, tirelessly explored the territory of Russia, Belarus, Ukraine, Lithuania. As a result, more than 20 centers of the free bison breeding were created. 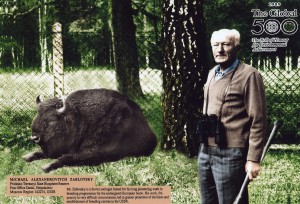 In 1989 Mikhail Zablotsky was the first Russian scientist, who received the United Nations Award “The Global 500”, which is awarded to people and non-governmental organizations made the most significant contribution to the environment conservation and study.

Selfless work started by Zablotsky is unique and has no analogues in the history of world biology. The bison is the only animal species, which was completely exterminated in the nature and survived only in captivity in zoos and animal parks, but now is returning to the nature due to international long-term concerted efforts of scientists. The Breeding Centre experience is accepted all over the world while organizing work for the salvation of other rare species.

According to Sergey Donskoy, the Minister of Natural Resources and Environment of Russia, naming the reserve after Mikhail Zablotsky will perpetuate the invaluable contribution to nature conservation made by that outstanding scientist.