The official day of volunteers was established in 1985, when the UN General Assembly proposed annually on December 5 to celebrate International Volunteer Day.
Today, there are many volunteer movements and organizations around the world. They pursue various goals, but the main principle remains the provision of voluntary disinterested help to those who need it. People devote their free time to socially necessary and important matters, regardless of age, gender and social status. 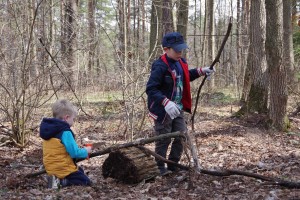 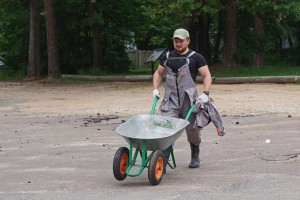 Volunteer assistance in Russian reserves is a work in the conditions of amazing nature, and sometimes an opportunity to see rare animals. Volunteers have been working in the Prioksko-Terrasny Reserve for a long time, dozens of volunteer actions take place every year, in which hundreds of people take part. Our voluntary assistants help to improve the territory, clean the corrals of the bison nursery, conduct accounting work and much more.

Congratulations to all our assistants, your help is very important, we greatly appreciate you! We also want to wish good luck and happiness to all volunteers in the world. 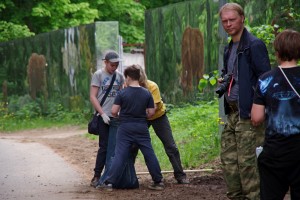 History: In the understanding of people, the word “volunteer” has changed greatly over time. Initially, volunteers in Europe were called exclusively volunteer soldiers. This manifested itself in large quantities during the Eighty Years (1568-1648) and the Thirty Years’ Wars (1618–1648), when the participants in the conflicts called for fighters under their banner with the condition that only the glory and military booty would be their reward. So in the XVII century appeared French volontaire, Italian volontario, German Volontair, English volonteere. Therefore, in the Russian language during the eighteenth and nineteenth centuries, pronunciation could vary: volentir, volontir, voluntir, valentir, volunteer. But, with the passage of time, the first volunteer organizations, not of a military orientation, appeared in XIX. Officially, the foundation of the international volunteer movement is considered to be 1920, when World War I veterans, former soldiers of the warring armies, gathered for the first volunteer rallies to restore the destroyed village near Verdun together. In Russia, the holiday has been officially celebrated since 2017, and the next 2018 was even called the year of the volunteer. Now, both around the world and in Russia, there has been a steady increase in the number of citizens and organizations participating in volunteer activities.