Volunteers from the Preobrazhensky Brotherhood of the city of Moscow decided to spend their weekend on physical work a hundred kilometers from the house.
The central bison nursery works seven days a week, so on the morning of July 6, volunteers were already looking forward to.

The scope of work for them was determined long ago and the entire large team quickly dispersed over the territory. Part of the people was involved in painting the fence and outbuildings, and the most successful got cleaned bison pen from the deadwood. 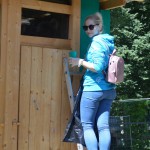 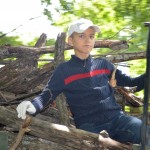 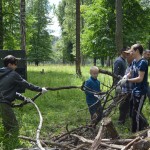 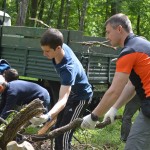 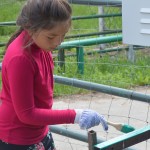 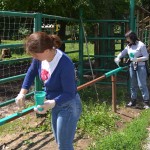 The nursery workers, of course, isolated the bison from the volunteer guests and vigilantly observed to avoid unpleasant meetings and possible misunderstanding between the volunteers and the bison.

Volunteers worked for a long time and did not even have time to drink tea. Instead of rest, they chose to complete the work begun. When the work was completed, and everyone gathered for a traditional tour, a powerful bison named Murakami came to the grid of the pen, cleared by the volunteers from the tree.
He walked along the net for some time, accompanying a group of guests. It was clear to all those present that it was only with his personal permission that this summer volunteer day was so successful.

Volunteers had planned a lot of important things. But in the evening they left the Prioksko-Terrasny Reserve. We hope that this meeting was not the last one and we will meet again and again.
Many thanks to all the volunteers of the “Preobrazhensky Brotherhood” and see you soon! 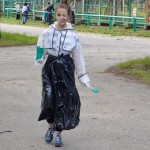 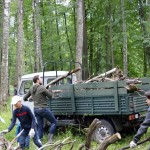 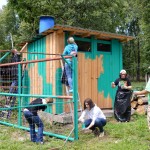