The Prioksko-Terrasny Reserve always gladly welcomes schoolchildren, young students and, especially, students of biological science circles. They always have something to learn, there is an opportunity to learn something new in our untouched “natural laboratory”.
Therefore, it was not surprising that in early November an organized group of 28 Moscow schoolchildren accompanied by 8 teachers arrived at the Central Estate. The administration of the reserve was pleased to provide children interested in gaining knowledge about the environment and actively participating in biological programs throughout the year with the opportunity to visit our reserve.

One of the main attractions of the Prioksko-Terrasny Reserve is the bison, therefore, the day of young biologists began with an excursion to the Central Bison Nursery. Schoolchildren got acquainted with the main goals of creating a reserve and a bison nursery located on its territory, and in the museum with details of the life of various inhabitants of the Prioksky forest as a whole. They learned a lot about how bison live, about the biology of these beautiful animals, about the features of the local flora and fauna that are preserved here intact. 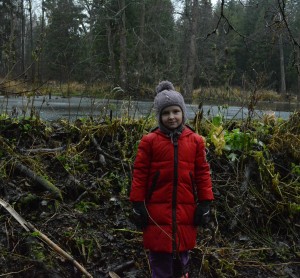 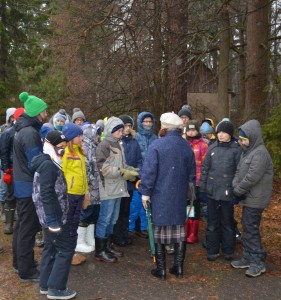 But the excursion program did not end there. Having reinforced the growing organisms with a light lunch snack, the young people went on an exciting walk into the forest. Now they were waiting for beaver settlements. The Prioksko-Terrasny Reserve was directly involved in the return to nature of these hardworking builders who disappeared on this territory several hundred years ago and now populate the entire Moscow Region.

Having examined several streams, the children discovered a cascade of four beaver dams, which formed wide backwaters. The plants are connected with each other by paths or “climbs” through dams, and along the banks both fresh and old gnawings were discovered. Following the traces of life, the young people suggested that one or two beavers live here.

Another beaver settlement was distinguished by a large number of gnaws, moreover, quite fresh and, possibly, created by beavers the day before. The dam looked completely new, next to the big hut were stocks of branches for the winter – a “table” that would help a large beaver family survive the cold season. Among the gnawed trees, aspen and black alder prevailed.

A short, but very busy autumn day ended – for children it was an adventure, and training, and chatting with friends, and an unusual experience in the wild.