The choice of territory for the revival of bison

The choice of territory for the revival of bison

The territory for the creation of bison Nursery had to be found in the center of the European part of Russia, and to meet several requirements:

– biological suitability for bison habitat
– convenient transport communication, which allows to transport bison without excessive complications
– legal protection of the territory (status of a reserve or reserve) 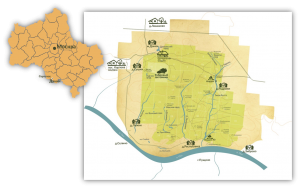 Mikhail Zablotsky with the participation of Peter Jurgenson, a survey of a number of forest areas was carried out and for the construction of the Central Bison Nursery the territory of the Prioksko-Terrasny site of the Moscow Nature Reserve was chosen.

It was here that the remnants of the oak groves were preserved and there were areas of mixed forests with grassy cover, optimal for the bison habitat. Nearby was the railway station Serpukhov from which to the territory of the reserve, was driving the road.

So in Russia the epoch of bison revival began, when in 1948, instead of the two wagons delivered to Poland with exotic polar bears, camels and elk, 4 bison were received. They were placed in Nursery, specially organized in the Serpukhov district of the Moscow region on the territory of the Prioksko-Terrasny state reserve.