That summer has come!

That summer has come!

In the protected forest rages life. On each “forest floor” something new is happening: under the crowns of rustling leaves, long-tailed tits roll around in whole flocks, young birds have already flown out of their nests and are traveling with their parents. In these squeaky flocks, one can easily distinguish the snow-white parents from the coal-black young ones, in whom a white stripe runs along their forehead.Slightly lower from branch to branch, blackbirds nestlings clumsily fly over. They have very short tails and have not yet grown feathers on the wings. They fly while awkwardly, quite often find themselves on the ground, stay there and beg for food from their parents. Blackbirds-parents do not lose sight of all of their growing chicks and will definitely fly somewhere close by in search of juicy and tasty worms.

From the depths of the tree hollows are heard loud cries of the chicks of the great spotted woodpecker. The endless hubbub of hungry children makes parents excitedly rush about in search of food. We witnessed one interesting family scene, when both parents flew to feed the chicks at the same time: the beaks are full of food, but only one bird can crawl into the hollow. 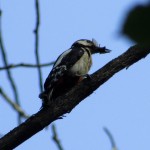 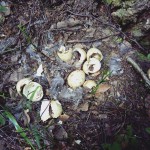 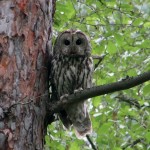 Faced near the hollow, the female and male woodpecker flew off and began to shout to each other. They flitched from one tree to another, rushing around the hollow, as if arguing about who would feed the children first. As a result, this dispute was won by a female, which brought in a beak large and juicy caterpillars. The male brought one big and tough May beetle. Is there really a “feminine” and “masculine” approach to the selection of food? But this is not important, as the mouths of hungry chicks will gladly accept any of these feeds.

In the hollow, where hoopoe lives, is still quiet. These birds with clay-red plumage on their striped black and white wings flew to us a little later than some birds. Therefore, a couple hoopoe just waiting for the replenishment of the family. While the female sits in the hollow and heats the eggs, the male takes care of her and brings various larvae in her graceful beak. 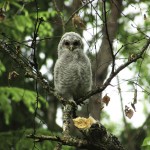 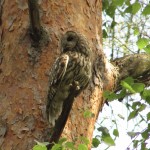 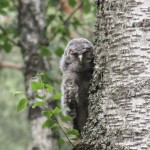 Brown owl chicks have left their cradles and some large hollows have already become empty. All brown owl chicks found in the reserve now look like big lumps of cotton with big black eyes. Owls usually sit with their eyes open to appear less visible. Owl chicks leave their nests before they are able to fully fly.
Under the fluff of chicks, feathers of adult plumage are slowly growing. And while the feathers are growing, the chicks will knead the muscles, and learn to control their body. In the process of learning, young owls often fall to the ground or are very close to it, but after a fall, the owls will climb along a tree trunk to a height where it will be safe. Climbing on a tree, the owlet uses everything that is given to it by nature: its paws, wings, and even its beak. At such moments, they can look very ridiculous and funny. Diligence of owls simply does not hold, it is worth taking an example from them! 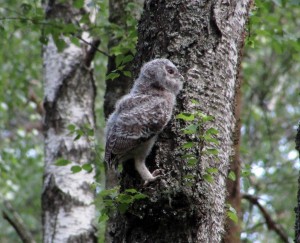 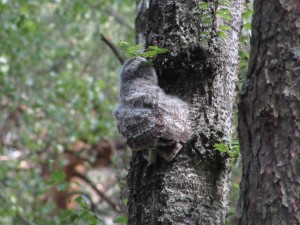 In the depths of the forest, hatched nestlings of wood grouse walk along the ground, and the roads of grouse now and then cross the roads of the reserve. In places where there is no high grass, you can see how a scared female woodcock carries between the paws of one of its chicks. Fluffy ducklings glide quickly along the water surface of the lakes. In the yellow-brown fluff, these chicks appear very visible in the wide water. But this impression completely changes as soon as the ducklings approach the reed beds.
Somewhere very near, in the bushes and in the coastal vegetation, the voices of birds are heard. Between the reed beds the sedge warbler deftly darts. Her crackling song can be heard from dawn to dusk. The monotonous chanting of the river warbler is heard near the rivers and reservoirs. The singing of this bird can be easily confused with the chanting of grasshoppers, and in the gardens and along the edges of the forest whistles and makes a sound “check-check” by Blyth’s reed warbler. These singers recently arrived to us and only now will begin to build their nests and lay eggs.

Such events and observations marked the first days of summer in the reserve.