Rimma Seyfulina, candidate of biological sciences, presented a summary report “Study of araneofauna (Arachnida: Aranei) of the biosphere reserve”. This new initiative of the reserve is being performed by Rimma Seyfulina the second season. Studies have identified 179 species of spiders living in the protected area. Taking into account the data about spiders found in this area by other researchers, a common list contains 243 species.

– Interestingly, that the species composition and community structure of spiders in the Doly tract, which form a unique meadow-steppe vegetation community, is markedly different from other habitats surveyed – said Rimma Seyfulina. – This finding highlights the uniqueness of Doly and confirms the thesis of the determining role of habitat, soil and vegetation cover for the spread of animals and the formation of their communities. Groups of spiders, typical for the southern regions of Russia with a dry habitat conditions, are presented in Doly wider than on other meadows.

At the meeting, the Academic Council adopted a plan of research works for 2016, providing for the participation of the reserve in the open publication of scientific data on biodiversity, the Global Information System (GBIF www.gbif.org). In the coming months will begin preparation for the publication of information about the flora. Members of the Academic Council also decided to continue the publication of a series of scientific works of the biosphere reserve in the traditional style and to prepare for the 100th anniversary of Russian Reserve system the seventh issue of the “Proceedings of the Prioksko-Terrasny Reserve”. 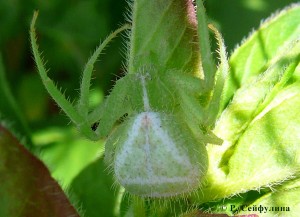