On August 23  samples were collected for routine investigations in the Bison Breeding Centre before sending the animals in 2016.

Blood sampling was carried out by the experts of the Serpukhov District Veterinary Station on Animal Diseases. Thanks to the coordinated actions of the Centre and the Veterinary Station’s staff, all the manipulations had a minimal negative impact on bisons. The samples collection of seven heads to be sent took just a bit over an hour. In addition to the standard research set, a whole blood sample was taken for further serological (determination of antibodies to the presence of a number of pathogens), genetic and immunological (analysis of innate immunity) analysis at the Institute of Ecology and Evolution named after A.N. Severtsov (IEE RAS) and the Russian National Research Institute of Livestock (RNIL).

Pure-blooded bison breeding for genetic conservation and resettlement in their natural habitat remains one of the main tasks of the Prioksko-Terrasny Biosphere Reserve staff. Therefore the Bison Breeding Centre holds systematic bisons veterenary checks, weighing, samples collection and other preventive measures in order to ensure that the exported animals stay out from various desease suspection. A modern cattle fixing machine Priefert S04, which allows to hold the animal mechanically but stresslessly, was bought in 2015 specially for collecting samples. This year a special pen with an enclave was bulit for the mass sample collection. 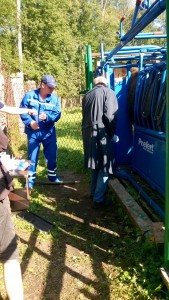 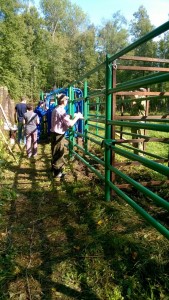 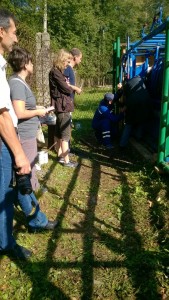