The Bison Breeding Centre (BBC) was created in 1948.

It is the centre of European bison breeding, a place for research in biology, ecology, bison ethology, methods of bison keeping, feeding and transportation. Besides, specialists from other bison breeding organizations do a course in the bison breeding centre.

The objectives of the bison breeding centre are:

The first European bison came from the Polish reserve called “Bialowieza” on November 21, 1948 It was the bull named Puslav. In the second part of imported animals coming from the same breeding centre there were two females named Plesse and Pustulechka and male named Pletsukh II. 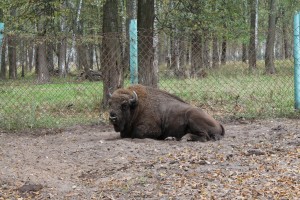 Bison are kept in conditions that are close to natural ones; they live in the wood land of about 200 hectares that is surrounded by the mesh fence. The territory of the breeding centre is divided in a passage-like way to 8 isolated paddocks. Each adult bison occupies the territory of 5-6 hectares of the forest pasture. Apart from natural grazing, bison eat combined feed and woody forage (trunks and branches of aspens and willows), and in winter they also get hay and root vegetables (carrots, beet-roots).

Bison export for the purpose of their resettlement began in 1951. Within the period of the breeding centre existence, more than 600 calves were born; about 70% of them were exported to various places in Russia and abroad. Breeding bison in the nursery helped reduce the loss of genetic diversity and get livestock to create new populations. Calves raised in Moscow suburbs are resettled in 30 wild habitats and 33 places of bison breeding in captivity.

From the young stock grown here breeding centres were created in the Oksky State Biosphere Reserve (1959), in a hunting estate “Nauyamestis’ in Lithuania (1969), on a wisent farm “Cherga” in Altai (1982) and others.

The young stock is grown up in the breeding centre up to 1.5-2 years, and then it is transported to establish new bison breeding centres and wild habitats. 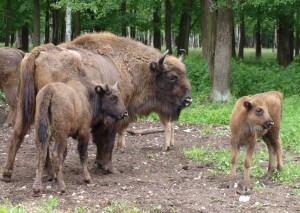 Now the European bison, which survived only in captivity, is the only world example of successful returning to nature. The species was saved from extinction due to many years of concerted efforts of experts from Russia and Europe, including the staff of our Bison Breeding Centre. Now the number of the world’s livestock is approximately 4,500 bison, about 3,000 of them live in their natural habitat, the others live in breeding centres, zoos and zoological gardens.

However, in general the species still belongs to the group of vulnerable species (VU) in the Red List of the International Union for Conservation of Nature (IUCN). In Russia, according to the Red List of the Russian Federation, the European bison belongs to category 1 – endangered species. Hard work is needed to create stable wild bison populations.

Now the bison breeding centre is carrying on the activities on the preservation of bison gene pool in Russia; it supplies with the animals the Smolensk, Kaluga, Bryansk Regions and other districts to create stable wild populations, as well as continues the selection work.