The Reserve was founded on June 19, 1945. According to the International Union for Conservation of Nature (IUCN) classification, it is related to IA category — STRICT NATURE RESERVE (State Nature Reserve).

The territory of the reserve is permanently withdrawn from agricultural use and is kept as a nature standard of the southern suburbs of Moscow.The Museum of Nature is open to the public so that in order everyone could be informed of the activities of the reserve, its flora and fauna. It is allowed to visit the demonstration part of the Bison Breeding Centre.

In the reserve it is forbidden to:

In the surrounding area of the reserve, a buffer zone is located. It is 2 km wide with the total area of 4710 hectares. It includes the whole Oka floodplain, adjacent to the southern boundary of the reserve, and forest compartments of “Russian forest”, which surround the reserve. 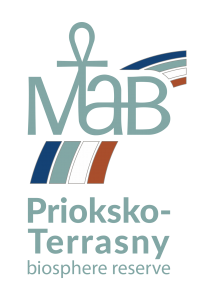 In 2016 to complete the UNESCO requirements the FSBI “Prioksko-Terrasny State Natural Biosphere Reserve”, the Serpukhov district administration, and Puschino city administration, agreed to create the territory of cooperation on the territory of Danky rural settlement and the town of Puschino by signing the agreement on cooperation in the area of sustainable development of the Prioksko-Terrasny Biosphere Reserve with the UNESCO. Since signing the agreement, the Prioksko-Terrasny Reserve has included the following territories:

The UNESCO program “Man and Biosphere” (hereafter MAB program) exists since 1971 and is an intergovernmental scientific program aimed at improving the relationship between the humankind and the nature. The MAB program is a unique platform for cooperation in the area of research and development, creating the potential and networks for sharing the information, knowledge and experience of three interconnected issues: saving biological diversity, climate change adaptation and sustainable development. The program does not only help to understand the environment better, but also increases the level of science and the scientific community participation in working out the policy measures concerning the rational use of biological diversity.