Joyful news reached the Prioksko-Terrasny Reserve from the Republic of Chuvashia. There, in the Novocheboksarskom zoo “Yelnikovskaya grove”, a new inhabitant has recently appeared – a little bison.

In the summer, in the middle of July 2018, an elderly female Bison Mulana and a young female Marsianka bison moved to the new place of residence from the Central Bison nursery of our reserve. And so, on the 24th of September, Mulana brought forth posterity. The little calf has not yet received a name, and we look forward to this important event.

There are already proposals to call the bull Yuman, which in translation from Chuvash means “Oak” or Bulat – “Strong”. If you want to offer your options, you can send nicknames to the editors of the newspaper “Grani” and to the e-mail: pavlova@grani21.ru. 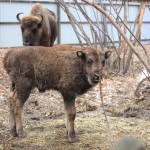 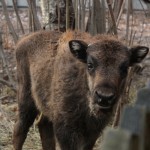 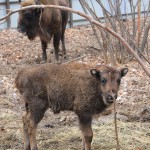 The central bison nursery of the Prioksko-Terrasny Reserve, has been engaged in the restoration of the bison population for 70 years. The first bison came to us from Poland on November 21, 1948.

Every year, young animals from our nursery, replenish freely living herds and livestock in other nurseries.