Nest at the forest stream

Nest at the forest stream

Spring is nearing its end, the first days of summer are just around the corner. The May holidays had already flown by, and we, full of strength, went to work after the weekend. What about the birds?
But the birds were not up to the rest! Now comes the end of the first half of the breeding season of birds. Almost all the birds returned after wintering, the songs of the first nightingales, robins and rosefinch are already heard, and the chaffinch voices have long since filled all the forest. Many of the birds are involved in love games, and those that have already found a mate, slowly, build nests. Each species has its own approach to creating nests. Each nest, like a small work of art, requires a lot of effort and a considerable amount of building materials to build. A variety of mosses, lichens, blade of grass, twigs, bark, needles, down, clay, feathers and wool, etc. can act as a building material. We can list for a long time all the materials that birds use to build nests. 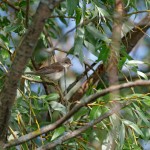 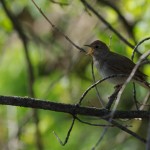 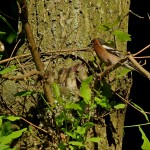 But not all birds work on building nests; some species have chosen a different strategy.
Let’s imagine that we were in a bright spring forest. The sun warms your shoulders, and the leaves of birch and aspen rustle above your head. Between the shrubs flows a small forest river that feeds thick grass sprouts. The place here is well moistened, and near the river among the windbreak there is a loud crackling song wren – an amateur of such places. Another step forward, and at this moment a bird a little larger than a dove flies right out from under its feet with a loud noise of its wings.

A harsh and rather loud noise at first makes you wince. Everything happens so fast that you do not have time to understand what happened, and even more so to see the bird. The bushes of wild black currant are visible ahead, this bird flew out from there. We see several striped plumes hooked on the branches of the bush.

And now – a find! On the ground under the bush there is a small fossa. It is lined with leaves, and only a few thin dry twigs form the walls of the nest. The fossa itself has a diameter of not more than 20 cm, and a depth of about 5 cm. In the center lie eggs of a brownish-yellow color with dark red spots. This is a hazel grouse’s nest.

The simplicity of such a nest allows it to be imperceptible to prying eyes. The hazel grouse female sitting on the nest completely hides its future chicks due to its camouflage coloring. From a distance hazel grouse looks smoky-gray, it makes the bird completely invisible in the forest. The outfit of an adult bird is formed by a combination of black, brown, red and white stripes and spots. When a bird is alarmed, a small crest appears on its head. Of all the uniform gray outfit, only one detail is knocked out – the red ring around the eyes.

But this does not prevent him from masking. Differences in coloring of plumage between male and female grouse in the wild cannot be seen. Males have a black spot on the throat, a black bottom of the head and a more pronounced crest. The female has a gray throat and a crest is smaller. The female always sits on the nest, and the male can stay nearby while the eggs are hatching. 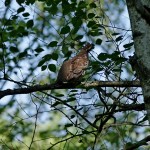 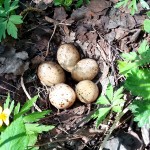 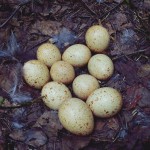 Immediately after hatching, the chicks are fully prepared to explore the world around them. This type of development of chicks is called “brood”. Due to the duration of incubation (21 days), the chick inside the egg develops longer and has enough time to form for independent living. Small grouse are sighted, fluffy and with strong paws. From the first days of their life, they can follow their mother and get food on their own.

Kids can successfully hide from enemies, hiding between fallen branches or in the thick grass. With all their independence, they still need maternal care. In the first days of life after each meal, the chicks need to be warmed by their mother. When the chicks grow older, the female takes them to lawns, where there are many small insects and caterpillars. Sometimes the mother can help the chicks to get food, such as ant eggs.

Externally, grouse chicks are very similar to the chickens we all know the domestic hens. And this is not surprising! Grouse, black grouse, wood-grouse and domestic chickens belong to the same order – to the order of galliformes. Due to the independence of the chicks, the representatives of the galliformes do not need to build large and complex nests, which in other bird species serve as a cradle and protection for the blind and naked chicks. 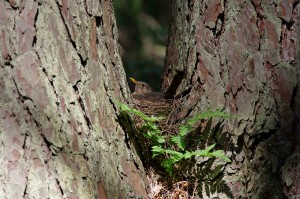 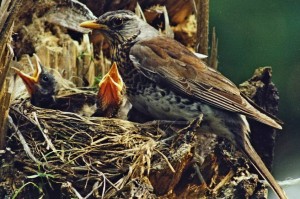 In our reserve there are not only grouse nests, but also wood-grouse nests. At wood-grouse the sizes of a nest and eggs are much bigger. The nest diameter is more than 25 cm, and yellowish-white eggs with brown spots are similar in size to the eggs of domestic chickens. But ornithologists will have to wait longer for the chicks of the wood-grouse – the females are only now beginning to incubate the clutches, and only in the second half of June the chicks will begin to appear.
We very much hope to meet these chicks soon, accompanied by their mothers! And in the fall, when the chicks are already growing up, the staff of the reserve will carry out a survey of galliformes so that it is possible to estimate the size of the populations of these birds in our reserve.