Muzhichok has left for warmer lands

Muzhichok has left for warmer lands

Along with the autumn, came the time of bisons resettlement in places where they are kept in their natural habitats. The young bison Muzhichok was the first to head towards warmer lands, he was sent to the Rostov Zoo.

The young bison Muzhichok was sent to the Rostov Zoo from the Bison Breeding Centre on September 14. Before that the staff of the reserve and the zoo had done a lot of preparatory work to implement the requirements of the keeping terms of the endangered animal. Besides the food base appropriate the bison diet, the main requirement was a secure enclosure with a shed, protecting from the hot sun, and a double fence that would protect the bison from visitors wanting to pet and feed him.

Muzhichok is a young bison with a hard as nails character, but very inclined to people. The thing is that he was not born in the warmer months as the rest of the calves, in early January, and in the age of two months he survived a lynx attack. A month ago our hero was one of the bisons involved in the research blood sampling. This procedure was carried out very quickly and without unnecessary stress for the animals. The process of transportation was also very exciting for the bison. Muzhichok was being persuaded to walk along the line (it looked like a corridor with acorns) and go into the cell for 5 hours. The whole process drew attention of the bisons from the neighboring pens. It looked like the bisons were negotiating, they produced different sounds and even grunted, which perhaps were the sounds of encouragement or farewell. The staff had to resort to all kinds of tricks like various treats, which in the end worked – Muzhichok came to the cage, it was loaded, fastened and sent away.

The day after, September 15, Muzhichok ran out of the cage, and as a real man’s man immediately ran to his food, carefully prepared fresh cut grass and branches. And only after a hearty meal, he began to explore his new home. Muzhichok will live in a small pen for a month-long adaptation period, then he will move into a newly-built pen to his new family consisting of two females. 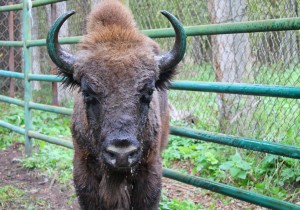 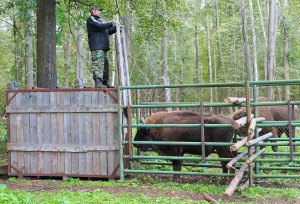 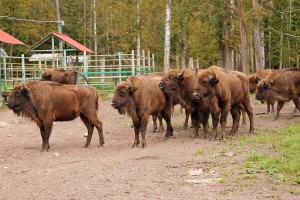 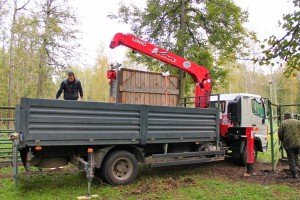