The Moscow State Reserve was created on June 19, 1945, after the victory in the Great Patriotic War. It consisted of 5 districts: the Privolzhsko-Dubnensky, the Gluboko-Istrinsky, the Verkhne-Moskvoretsky, the Verkhne-Klyazmensky and the Prioksko-Terrasny.

On April 3, 1948, each district of the Moscow Reserve was granted the status of an independent reserve. 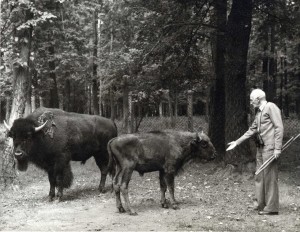 In 1951 according to the Decree of the USSR Government, two thirds of the existing reserves were closed. Among them, there were 4 reserves located in the Moscow region. The Prioksko-Terrasny Reserve was not closed only because in 1948 Mikhail Zablotsky, an outstanding Russian scientist, created here the Bison Breeding Centre for the restitution of this almost exterminated species. Thus, the European bison saved the reserve from closure.

Over the years, in the Bison Breeding Centre there were born more than 600 purebred European bison; most of them were resettled in plain and mountain forests of Russia, Ukraine, Belarus, Lithuania within the former habitat of this species. They have already given birth to several offspring generations in wild nature.

In the early 1950s, the Museum of Nature was constructed at the Reserve Office. The exposure of the museum was created by Vladimir Arsenyev, later Sergey Kuligin carried on the work.

Since the early 1970s in the reserve, there has been made the ecological monitoring. On February 19, 1979, the reserve was certified by UNESCO and was granted the status of a biosphere reserve. In July 1983, an integrated background monitoring station was created.