Today the story will be about hares (Lepus).The hare is the most recognizable inhabitant of our places. We are familiar with him from early childhood, he is a constant positive hero of folk tales. This is a poor fellow who is hurt by everyone, though not always. Sometimes the hare himself defeats enemies, turns out to be agile, cunning and brave.
In our places there are two species of hare – brown hare and white hare. Вrown hare prefer forest-steppe, but white hare love forests. In Prioksko-Terrasny Reserve both species live well. 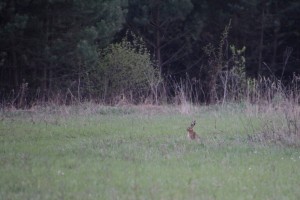 The main protection of the hare from enemies – stealth, caution and fast running. Perhaps that is why people consider the hare to be cowardly, but this is not at all the case.
The hare is a cunning, calculating and cold-blooded beast! Large ears scan the surrounding area, sensitive wet nose analyzes thousands of smells, and vigilant dark eyes look out for danger. When the enemy approaches, the hare begins to count the ways of retreat. He is absolutely calm, because before lying down to rest, he has well entangled the trail, made from two to five long deceiving jumps in different directions.

The hare did not hide on its trail, but away from it. As soon as the enemy passes by on his trail past and turns his back, the hare slowly leaves, without waiting until the predator has solved all his tricks. If the enemy goes straight to the hidden animal, he hides, confident in his disguise. He will jump out from under the very feet of a predator only as a last resort!
Not many animals in nature can boast of such courage and iron nerves. During the breeding season, hares forget about safety, the males during battles with each other are so addicted that they may not even notice a human. 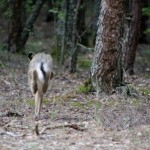 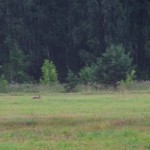 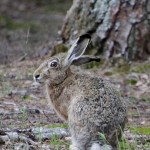 Hares are very fertile – if conditions are favorable, they can have young cubs four times in spring, summer and autumn. The last brood, born in the fall, is called «leaf-leaved». Very rarely there are hybrids of the brown hare and white hare – they are called “tumak”.
This year the summer was good, warm and not raw. If the weather does not change, the hares will have several broods, and all of them will meet the winter with stronger and armed with a huge arsenal of tricks.