For the benefit nature conservation

For the benefit nature conservation

Spring voluntary works were held in the Prioksko-Terrasny Biosphere Reserve on April 20-25 as a part of the campaign “The European Day of Parks 2015″.

Every day at 10 a.m. the Environmental Protection action started with a briefing and job management. Volunteers toiled selflessly till to 1 p.m. After a short rest they were presented with a tour around the bison breeding centre and the Museum of Nature in gratitude for their assistance.

On April 22 twenty Serpukhov Military Institute of Missile Forces cadets helped to dismantle old buildings in the reserve. On April 22 twenty employees of fire and rescue service (EMERCOM of Russia, the Main Department of the Moscow region) helped cleaning the four areas of the reserve, which is one tenth of its specially protected natural territory. The same day, senior pupils from the Danki School removed dry branches around central farmstead. Just one and a half hour of youthful enthusiasm and energy resulted in a great scope of work done.

On April 24 the nature reserve was visited by permanent helpers – “Gazprom Transgaz Moscow” “Serpukhov control of trunk pipelines” employees. This time they cleared the bison breeding centre from dry twigs. During the subsequent tour one of the volunteers, Andrey Rozhkov, found a museum photograph of his grandfather, George Rozhkov, who had worked in the reserve in 1953-1968 as a fur breeder. So his grandson was proud to tell his children about their great-grandfather.

On April 25, Saturday, a public volunteer day was held in the reserve. Many volunteers were not too lazy to wake up early in the holiday morning to catch the train from Moscow, and the team of the school forestry “Green House” MBOU secondary school №3 arrived from Protvino. Armed with brushes and enthusiasm, they painted the bison breeding centre for few hours. According to Evgeny Grigoryev (the Director of the reserve), such people are worthy of admiration and respect.

The Prioksko-Terrasny Nature Reserve would like to thank everyone who devoted the time to work for the good of specially protected natural territory. This action has given a start to volunteer days holding. They will be held in reserve on the third Saturday of each month from May to October. 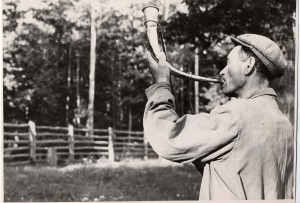 Fur breeder George Rozhkov, grandfather of one of the volunteers 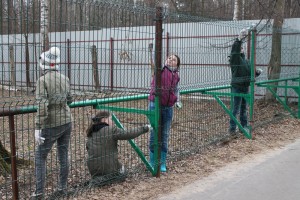 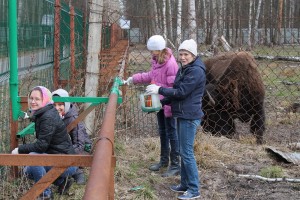 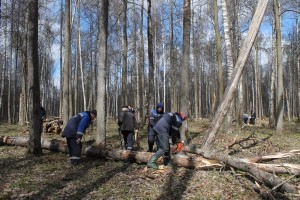