On March 1 the project “12 Wonders of the Prioksky Forest” was launched, dedicated to the representatives of fauna and flora characteristic of the territory of Prioksko-Terrasny State Nature Biosphere Reserve. The project will last for a year – from March 1, 2021 to February 28, 2022 and will have 12 stages. The largest bird of the Moscow region, the capercaillie, will open the project. The mating season begins in March, so you can hear the famous mating calls of the capercaillie males. As part of the competition, we propose to make a handicraft, with the image of this amazing bird. Let your imagination run free!

On March 2 and 3, the scientific department of the Prioksko-Terrasny State Reserve welcomed guests from Orlovskoye Polesye National Park and Ugra National Park. The protected areas, from where our guests came, are now home to numerous free-ranging populations of bison. Young animals from the Central Bison Nursery of the Prioksko-Terrasny State Nature Biosphere Reserve were repeatedly sent to replenish these populations. Therefore, first, the National Parks staff was interested in the methods of bison keeping, marking and transportation used in our nursery. Colleagues shared their practical experience connected with the bison living in the wild: methods of animals accounting, zootechnical methods and peculiarities of bison behavior in free grazing conditions. All specialists noted the positive dynamics of population growth of the last wild bull of Europe, both in Russia and abroad. The guests visited the station of background monitoring, where the Reserve carries out meteorological observations and controls the level of environmental pollution. In addition, the staff of specially protected natural areas discussed other issues: conducting phenological observations, methods of winter route accounting, updating the database and digitizing scientific documentation. Undoubtedly, such meetings are important for specialists who do one important thing – preserve the fragile nature of our country.

On March 13, within the framework of the day of the Ministry of Natural Resources and Environment of the Russian Federation, Svetlana Rodionova, Director of Prioksko-Terrasny State Reserve will tell about the tourism potential of the only reserve in the Moscow region. The Director of Centre of the Russian Ministry of Natural Resources, Evgeny Stupnikov, will open the event with a report on the activities of the Russian Ministry of Natural Resources aimed at the development of ecological tourism in the protected areas of the country. The program “Journey into the world of wild nature” participants will be representatives of specially protected natural areas from different regions of the country. The program will be divided into three blocks: “The world of unforgettable journeys: conquer your element”, “My native land is wide: from glaciers to deserts…” and “See nature and touch history”. The forest firefighting unit of the reserve is well prepared for the fire season of 2021; its staff undergoes regular professional training. Firefighting equipment and tools, fire-fighting vehicles and equipment are in full readiness. Soon snowdrifts will melt under the spring rays and a busy time will begin for all those who have to protect the nature from the wildfires. Forest firefighting team of the reserve is as always in full readiness.

The tourism potential of Prioksko-Terrasny State Nature Biosphere Reserve was discussed at the All-Russian Festival of Nature “Primordial Russia”. Svetlana Rodionova, Director of Prioksko-Terrasny State Nature Reserve, made a presentation and spoke about the tourism potential of the only nature reserve of the Moscow region within the thematic section “My native land is wide…”. Representatives of sixteen federal nature reserves and national parks spoke at the day of the Ministry of Natural Resources and Environment of the Russian Federation. The program “Journey into the world of wildlife” turned out to be incredibly bright and rich. For many visitors it was a revelation to find a unique protected area a hundred kilometers from Moscow.

Prioksko-Terrasny State Reserve traditionally takes part in the largest International Tourism Exhibition MITT, which opens every spring in Moscow. MITT International Travel Show is the leading business platform where the world market leaders meet on the eve of the new tourist season. The event has a rich history, this year it is held for the 27th time. Representatives of Prioksko-Terrasny State Reserve told the visitors about the tourist potential and biodiversity of the specially protected natural area. Everyone could take pictures and hug the Reserve’s symbol – the Bison dolls! The luckiest guests received a certificate for visiting the bison trail during the daily drawing of prizes from the organizers. We look forward to seeing the winners at the reserve!

On March 17, the Vorobyovy Gory State Nature Reserve hosted the opening of the photo exhibition “Symbol of the Year – Pride of the Century”, timed to coincide with the Year of Science and Technology. The exhibition is dedicated to the last wild forest bull in Europe, the bison. This animal has survived only thanks to the joint, long-term work of specialists from different countries. In 2019, the bison was included in the 11 priority wildlife sites of the Federal project “Conservation of biological diversity and the development of ecological tourism”. Many years of joint work of specially protected natural territories of the Russian Federation has its results – on December 10, 2020, the International Union for Conservation of Nature (IUCN) changed the status of the bison on the Red List. It was transferred from the “vulnerable status” category to “near vulnerable status,” which confirms the success of a century of work to restore this species.

On March 20, Prioksko-Terrasny State Reserve conducts an educational campaign aimed at attracting public attention to the environmental well-being of our planet. Plastic pollution is a process of plastic products accumulation that negatively affects the environment. It negatively affects the earth’s surface, surface waters, and oceans. Efforts to reduce plastic pollution are taking place in various regions and include attempts to reduce the consumption of single-use plastics. For example, plastic bags, which are used daily by people: we often use them when buying food, storing and transporting. Using these bags is convenient, but in the nature, they decompose more than 100 years, causing enormous harm to the environment. The campaign is aimed to stop using plastic bags for packing fruit and vegetables, which are brought by guests of the Prioksko-Terrasny Nature Reserve for our bison. We offer an alternative – reusable eco-bags.

On March 20, the Prioksko-Terrasny State Reserve took part in the “Slipping World” program dedicated to rare and endangered animal species. Employees of specially protected natural territories made reports on the current state of the populations of such species as the bison, antelope, Persian leopard, Siberian white crane, argali, snow leopard, Przewalsky horse, Far Eastern leopard, Amur tiger and polar bear. These are the species that were included in the 11 priority wildlife sites of the Federal Project “Conservation of Biodiversity and Development of Ecotourism” in 2019.

Prioksko-Terrasny State Reserve announces the winners of the interregional eco-creative contest for novice clothing and accessory designers – “Stylish Dolls”! The contest included one nomination – “Eco-Fashionable Puppets”. It was a very difficult competition, because all items were intended for non-standard models, with unusual shapes, which our dolls “Bisons” have. Designers from all over Russia attended the event. We received works from Altai region, Republic of Mordovia and of course from Central Federal District of Russian Federation. All submissions were evaluated and tried on by the Bisons’ dolls. The Central Manor of Prioksko-Terrasny State Nature Biosphere Reserve became the podium of high fashion, where the final show was held under the flash of cameras.

On Saturday, March 27, FGBU “Prioksko-Terrasny State Reserve” will traditionally join the international action “Earth Hour”. Earth Hour is an international action during which the lights and electrical appliances are turned off for one hour as a sign of concern for the future of the planet. This is an annual event held by the World Wildlife Fund (WWF). This year the event is dedicated to the theme of environmental information transparency. Today Earth Hour is the most massive ecological action on the planet. More than 2 billion people all over the world in 188 countries take part in it and the lights of about 180,000 architectural monuments go out. The purpose of the action is not just to save electricity – it is a symbolic action to remind people about the problem of the depletion of natural resources.

On March 27, the Prioksko-Terrasny State Reserve took part in the program of the VIII All-Russian Festival of Nature “Primordial Russia”. Our Institution is a permanent participant of this largest ecological and educational event in Russia. Today was dedicated to the volunteer movement in specially protected natural areas of our country. Our old friends, the «Zapovednoe Ambassade» Foundation and the specialists of the Ecological Education Center «Zapovedniki» traditionally prepare the program of the event. On this day guests of the festival could take part in various activities: thematic lectures, forums, quests, interactive lessons, panel discussions and master classes.

Prioksko-Terrasny State Reserve announces the completion of the first stage of the inter-regional environmental education competition project “12 Wonders of the Prioksky Forest”! As part of the competition had to make a craft with the image of the largest bird of the Moscow region – the wood grouse. Despite the fact that the time for creation of the crafts was very short, the contest aroused great interest and a lot of works were sent to the address of the reserve. Participants from different cities of Russia had sent handicrafts made in various techniques and with the use of very different materials – wool, plasticine and fabric. We also received a lot of pictures. At an estimation of works, an important criterion was how the author would transfer the main distinctive features of the wood grouse during spring mating. We want to say many thanks to all the participants and follow our social networks to take part in the next stage of the competition.

The exhibition of rare photographs – “Prioksko-Terrasny Reserve in the Lens” began its work. Spring in Moscow region is the time of exhibitions and festivals. Specialists of Prioksko-Terrasny State Reserve are their constant active participants. In addition to large-scale events, we are happy to place our photo exhibitions, dedicated to the amazing nature of the Reserve, in a variety of venues. Thus, on March 31 based on the Library of Faculty of Biology of MSU Scientific Library an opening ceremony of the photo exhibition “Prioksko-Terrasny Reserve through an Objective Lens” was held. The only Moscow Region reserve is a unique place – within an area of 4 960 ha there are 57 species of mammals and 153 species of birds, there are 981 species of vascular plants. Of the unique biodiversity of the territory, which is a model of nature of the southern suburbs, 261 species are included in the Red Book of Moscow Region and 14 species in the Red Book of Russia. The exhibition will last six months, until autumn. We hope it will interest not only teachers and students of the famous educational institution, but also all guests of the library. 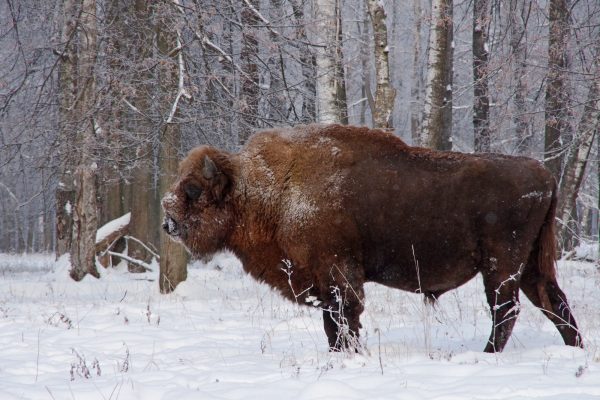 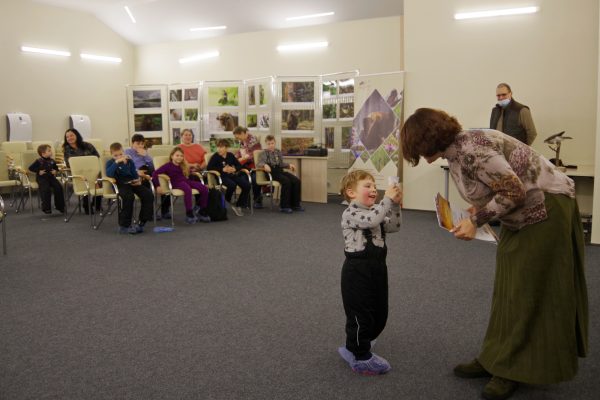