On the eve of the Day of Natural Reserves Workers, the All-Russian Scientific and Practical Conference “RESERVES – 2019: BIOLOGICAL AND LANDSCAPE DIVERSITY, PROTECTION AND MANAGEMENT” completed its work.
The organizers of the conference are the Crimean Federal University named after V.I. Vernadsky, the Department of Geoecology of the Tauride Academy, the Ministry of Ecology and Natural Resources of the Republic of Crimea and the Crimean Branch of the Russian Geographical Society.

The conference was held in the Republic of Crimea from October 10 to 12. It was attended by more than 160 experts in the field of conservation and study of biodiversity from 70 regions of Russia, including scientists and specialists from more than 15 reserves and national parks of Russia. 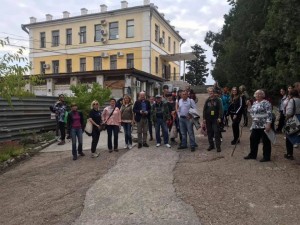 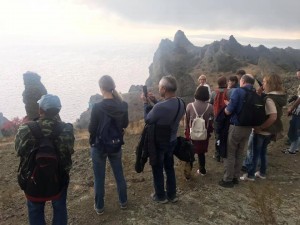 The participants discussed a wide range of issues related to the theory and practice of nature conservation, the state of nature reserves in Russia, the formation and functioning of regional and local ecological networks, landscape and environmental studies, as well as the problem of obtaining international recognition and integration of Crimean protected areas into the Russian and international network.

The Prioksko-Terrasny Reserve became one of the organizers of the round table “Phenological Observations in Protected Areas: Unification of the Observation Program and Methods, Standardization of Database Formats”, as well as discussions of conducting complex background monitoring in specially protected natural territories of the Russian Federation. On Friday, October 11, was the day of the conference’s field work in the Karadag Nature Reserve. Participants walked along the Great Karadag ecological trail and visited the Background Environmental Monitoring Station. After Crimea became part of Russia, this station became the sixth background monitoring station in Russian reserves, but, unfortunately, it has not yet been integrated into the all-Russian monitoring network.

On the initiative of the administration of the Crimean Nature Reserve, on October 12, a group of conference participants made a study tour to the Crimean National Park, which was transformed from the Crimean Nature Reserve in 2018. At a high professional level, the territory was presented by the head of the department of science, Marina Rudenko. The national park faces complex challenges in integrating Russian and international protected areas networks into the system, and the trip participants unanimously express confidence in achieving their goals and are ready to help and share knowledge and experience. Thanks to the organizers, the staff of the Crimean nature reserve (the institution still bears the former name of the reserve) for organizing a useful and interesting meeting.

Reference: “In order to protect unique natural complexes in the Crimea, specially protected natural areas are being created. Currently, protected areas occupy 8.6% of the peninsula, ”said Alla Arkhangelskaya, Deputy Minister of Ecology and Natural Resources of the Republic of Crimea. She also noted that the nature of Crimea is unique and vulnerable and our common goal is to prevent the loss of this uniqueness, to preserve natural complexes for the future generation and instill responsibility for the conservation of natural diversity.