Scientists of the Prioksko-Terrasny Reserve have managed to establish authentically the permanent stay of the black stork this year and the beginning of its nesting.

The black stork appeared in strictly the protected area in May, but scientists could not identify the purpose of its visit. Finally, the researchers succeeded. Rimma Seyfulina, a scientific researcher, a PhD in Biology managed to take a picture of a couple of black storks being busy while building their nests in the central part of the reserve. Yury Buyvolov, a Deputy Director of Scientific Research, an ornithologist, a PhD in Biology is studying the black stork.

The black stork life pattern has been studied poorly. For the last 20 years in the Moscow Region, there have not been a proved fact of its breeding, though the birds were seen in Serpukhov and Taldom Districts.  Perhaps, scientific researchers are dealing with a young couple who appeared in the reserve looking for a nesting site in May and only in June, they started the construction of the nest. It is necessary to make the atmosphere of tranquility in the central part of the reserve, beyond the borders of excursion routes. The black stork is an extremely secretive bird, it always avoids human contact. Only the atmosphere of peace and tranquility presupposes its nesting for a long time. Normally, the stork uses the same nest for more than 10 years fixing it every year.
Article by Yu.A. Buyvolov, a Deputy Director of Scientific Research, a PhD in Biology

Photo by R.R. Seyfulina, a PhD in Biology 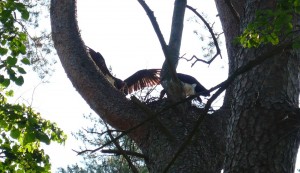