In the ancient city of Ryazan, on April 4 and 5, an interregional scientific-practical conference was held on the topic: «The strategy of bison preservation in Russia, the results and plans for the future».
Employees of the Prioksko-Terrasny Reserve took part in it, since the topic of bison breeding, the history of its preservation in our country is inextricably linked with our reserve, on the territory of which the Central Bison nursery has been operating for more than 70 years.

The conference was organized by the Ministry of Natural Resources and Environment of the Russian Federation, “Meschera National Park” and the administration of the Ryazan region. 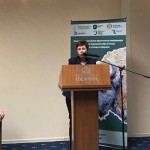 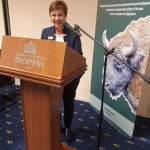 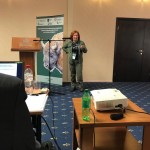 The meeting place was not chosen by chance — now in the Ryazan and Vladimir regions there are two large free populations of bison. As of January 1, 2019, the population of the European bison in these territories amounted to 157 heads. Plus, there is also a bison nursery of the Oka State Reserve. An increase in the bison population is now observed, and the conference discussed the possibility of settling bison in favorable places in the region, so that in the near future to gather at the border of two regions a free group of up to 1000 heads. The main objective of the conference was to discuss the results of the implementation of the Strategy for the Conservation of Bison in Russia, approved by the Ministry of Natural Resources and Ecology of Russia in 2002. Over the past seventeen years, much has changed and needs to be improved, so the development of a new “Strategy” was the main theme of the event. The current state and prospects for the development of bison free groups and methods of preserving the gene pool in nurseries were also widely discussed. 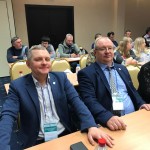 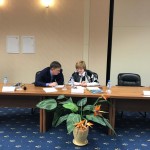 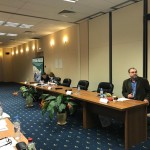 A report on the current state of the bison gene pool in the Central Bison nursery was made by Deputy Director of Prioksko-Terrasny Reserve Irina Zemlyanko. Our nursery is the center of scientific work on the restoration of bison, it has been conducting research on genetics for several years. The theme of genetics was also devoted to the speech of Olga Kostyushina, who spoke about the bison genetic diversity in Russia and Belarus.

Elena Sitnikova, Deputy Director for Scientific Work of the Bryansk Forest Reserve, made a introductory report on the state of the bison population in the Bryansk region. Director of the Orlovskoye Polesye National Park, Oleg Prigoryanu, presented a report on the formation of a free bison population in the Oryol-Bryansk-Kaluga region. Also at the event were many other professionals.

The conference participants developed a new “Bison Conservation Strategy in Russia”, and discussed practical issues of the formation of free bison populations in Russia. Soon the new «Strategy» and the resolution of the conference, with a list of specific proposals, will be published.